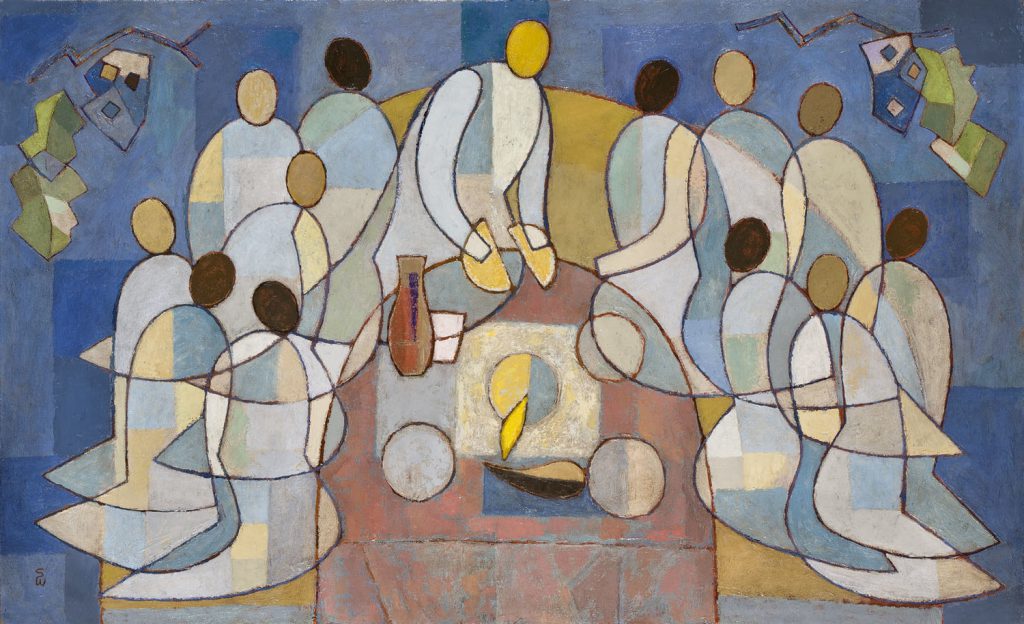 One day when the disciples were all together in one place, suddenly there came a sound like the rush of a violent wind, and it filled the entire house where they were sitting. Divided tongues, as of fire, appeared among them, and a tongue rested on each of them. All of them were filled with the Holy Spirit and began to speak in other languages.

It was the Spirit of God, that came like the rush of a violent wind and filled not only the house where the disciples gathered, but also the hearts of the disciples so that they were able to speak other languages. The languages that they spoke were real languages like the greetings we say, with which we begin the service.

At this, a huge crowd gathered, and they were astonished, saying, “How is it that we hear, each of us, in our own language?” and they asked themselves “What does this mean?” And yet, there were some people who showed a cynical attitude toward the disciples. They said, “They must be drunken.” (Thank you to those who participated in the dramatized reading which helped us understand what really happened 2000 years ago)

The reversal of the Babel

The people of Babel was not interested in trying to seek the name of God and the will of God, but instead they tried to make a name for themselves. Eventually, they were divided and scattered. No wonder, when fallen human hearts try to seek their own name, they fall in danger of being individualistic, self-centered, and even selfish, which eventually bring disharmony, disunity, and division among them .

On the contrary, when and only when the Spirit of God, the Holy Spirit, fill our hearts, we are able to overcome individualism, self-centerdness, and selfishness and to be united in His name and for the sake of His kingdom. Therefore, it can be concluded that what happened at Pentecost manifests how God restores His creation from the fallen to the redeemed, from the old to the new, and from division to unity.

When Jesus was with the disciples, He revealed that He would have to leave them behind. At this, the disciples became anxious and restless. He then said to them, “I will ask the Father, and he will give you another Advocate, to be with you for ever. This is the Spirit of truth, whom the world cannot receive, because it neither sees him nor knows him. You know him, because he abides with you, and he will be in you …. I have said these things to you while I am still with you. But the Advocate, the Holy Spirit, whom the Father will send in my name, will teach you everything, and remind you of all that I have said to you” (John 14:16-17, 25-26).

This was the assurance of His presence with them in a different way, which would be carried out through the Holy Spirit, the Third Person of the Triune God. So, we can understand that what happened at Pentecost was not an accident, but the fulfillment of what Jesus promised to His disciples.

On the other hand,  as we look at the story from a scriptural perspective, across the Old and the New testament, we can see the story of Pentecost is the fulfillment of the prophecy that Joel, one of the Old Testament Prophets, had made long before the birth of Jesus. “Then afterwards I will pour out my spirit on all flesh; your sons and your daughters shall prophesy, your old men shall dream dreams, and your young men shall see visions. Even on the male and female slaves, in those days, I will pour out my spirit” (Joel 2:28-29).

The last part of the chapter, following today’s reading, points to a remarkable change made in the life of the disciples. “All who believed were together and had all things in common; they would sell their possessions and goods and distribute the proceeds to all, as any had need” (Acts 2:44-45).

They had all things in common. They sold their possessions and goods. They distributed the proceeds to all, as any had need. The fulfillment of Jesus’ promise and the fulfillment of a divine prophecy brought a radical change in the concrete lives of the believers, which eventually created a new community. What is your impression on their new way of life? Doesn’t it sound ideal? ­Yes, it does.

The disciples and other believers experienced a change. From the viewpoint of the 21st century contemporary, the change was radical and the new form of life they experienced was an ideal one. Now our question is “What does it mean to us?”

Our interpretation of the term “ideal” can be twofold: Firstly, it can be interpreted as unrealistic. The communal life of having all things in common, selling our possessions and goods, and distributing the proceeds to all, as any had need, is too radical for us to choose today. So, it is unrealistic to us. Of course, there were various attempts for communal living and the commune movement in church history. Even today there are a variety of communes. But we may say, they share life together under peculiar life settings. So, generally speaking, such a radical form of life is not possible for most of us.

On the other hand, something ideal works for us as a goal. The disciples’ radical life change provides us with a guidepost on our journey of life. It constantly reminds us of what the Kingdom of God is like. The early disciples set an example of a faithful community, which encourages us, as part of the Church, to keep growing, maturing, and transforming as an earthly manifestation of the Kingdom of God.

Most of us are wondering what the Kingdom of God is like. So, we need to go to the Bible. Revelation 22 reads: “Then the angel showed me the river of the water of life, bright as crystal, flowing from the throne of God and of the Lamb through the middle of the street of the city. ­On either side of the river is the tree of life with its twelve kinds of fruit, producing its fruit each month; and the leaves of the tree are for the healing of the nations. …. And there will be no more night; they need no light of lamp or sun, for the Lord God will be their light, and they will reign for ever and ever” (Revelation 22:1-2,5).

However, the Kingdom of God will be FULLY established only when Jesus comes again. This is what the Bible says. We call it “eschatological reality,” which means “reality” that we will experience in full when the world comes to an end by the second coming of Jesus Christ. So, it is not surprising that the Book of Revelation, the last book of the Bible, closes with “Come, Lord Jesus!”

We do not know when it will be the last day of the world, when Lord Jesus comes again. Only we try to do our best today in sharing whatever blessing God bestowed us, so that we may have a taste of “eschatological reality” here and now.

At Pentecost the Holy Spirit was poured upon the disciples, which was what Jesus promised. And a new community was created, which was named the Church. We then, as part of the Church, come across a self-examining question: Do we have such a caring heart toward each other that we are willing to share whatever blessing God bestowed us? Our answer to the question would be one of the three: “We do,” “Not really,” or “I do not know.” The last two verses of Acts 2 validates our answer:

“Day by day, as they spent much time together in the temple, they broke bread at home and ate their food with glad and generous hearts, praising God and having the goodwill of all the people. And day by day the Lord added to their number those who were being saved” (Acts 2:46-47).

Let us pray: Lord Jesus, Come. We have watched so many people suffering in this corrupted world. So we have been longing for the day when You promised to come again. Thank you Lord, for giving us hope for the Day of Salvation, for giving us strength to stand steadfast against challenges and difficulties that we face daily in our journey of life. Thank you for the early community that set an example for us to follow, which teaches us how to live and how to love. We pray that, as we love one another more deeply, You add to our number those who are being saved, those who are praising God, and those who are sharing your blessings lavishly, for the sake of Your name. Amen.

This site uses Akismet to reduce spam. Learn how your comment data is processed.